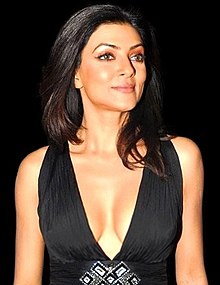 The Miss Universe pageant of 1994. Sen was the first Indian woman to win the crown.Sushmita was only 25 years old when she adopted her first baby girl Renee in the year 2000. After a gap of ten years, in the year 2010, she adopted a three-month baby girl whose name is Alisha. She feels proud of experiencing motherhood. The life of the single mother is not that much easy but sometimes life gives you challenges just to check your patience and by accepting such challenges she proves that a single mother can also take care of children’s.

Raveena Tandon is an Indian actress, producer, and former model. She has also received one National Film Award and two Filmfare Awards. Raveena Tandon adopted two daughters- Pooja and Chhaya as a single mother in 1995 (11 and 8 years when adopted) before she got married to Anil Thadani. After getting married, she gave birth to a girl named Rasha in 2005 and boy named Ranbir in 2007. Right now she is the mother of four cute children’s, she is taking care of all of them in a proper way. She is handling her personal life and her career both in a style that she is an inspiration to all the women around the world.

Pooja Bedi is a former Bollywood actress, television talk show host. She is the daughter of actor Kabir Bedi and the late Protima Bedi. Pooja was a contestant on the reality show Bigg Boss in 2011.She is an inspiration to those women who feel low when life hits them down. This happens with her in personal life when she got divorced with business tycoon Farhaan Ebrahim. Pooja is the proud mother of two beautiful children, Alia and Omar. After separation with her husband, Alia along with Omar are raised by Pooja Bedi single-handedly, and that is something that builds a confidence in her life also she becomes a role model for all the women around India.

Sarika started her film career as a child actor at the age of 4, play the role of the young boy in 1967’s  Hamraaz.  Kamal Haasan and Sarika were in a live-in relationship while Kamal was still married to Vani Ganapathy. That was a tough time for her during that time Sarika gave birth to Shruti Haasan and Kamal tied the knot with her after getting a divorce with Vani. However, the God was not that much happy by there marriage that leads to the result when Kamal and Sarika got split in 2004 and Sarika is now a single mom, she is handling her responsibilities very well as a mother or as a well-known actress.

Neena Gupta is a popular actress in Indian commercial cinema, but it is her work with art filmmakers of India like G. Aravindan. Neena Gupta had a love affair with Viv Richards – a former West Indies cricket player. She was in a relationship with former West Indian cricketer Vivian Richards in the 1980s, with whom she has a daughter, Masaba Gupta. She was also involved in relationships with Alok Nath and Sharang Dev. On 15 July 2008, she married New Delhi-based Vivek Mehra, a chartered accountant and Partner with PwC India in a secret ceremony in the United States and now Masaba is a famous personality in the fashion world. She may get involved with many famous males around the world but there is a fact that nobody denies is that she is a proud mother of a girl who is now a famous celebrity who is ruling the fashion world.